There is a ramble which I haven't written anything about at all as yet - number 4 - a collaboration with Sue Palmer. This hasn't been intentional, more a matter of not being able to find the time to recount it properly as it's been quite extraordinary...

Our first day together was in mid November. We then met once a month until April - finally bringing together all of our research with a work in progress showing on April 25th.

Our research has taken us through a lot of territories: From Hampton Court Maze and William III of Orange to The Great Hedge of India, The East India Company, The Museum of London Docklands, up and down the Jubilee line from Canary Wharf to Stanmore to find Elizabeth Brightwen's grave and 'The Grove' (or remains of it) PLUS a hidden grotto (with just beer cans inside of it). We've also shared numerous books / articles and various online sites (to name but a few of the strands we've so far followed). It's felt really rich and unbelievably connected to everything - to where we are today in terms of finance, ecology, nature, politics and has illuminated many histories that have been forgotten. Histories that maybe we should have learnt from and still be discussing today.

On top of all of this, Sue and I had never worked together before, so this ramble was as much about us exchanging information about our respective practices as anything else. Would we like each others aesthetics? Would conversation and dialogue flow? I'm please to report we DID and it DID. It felt really easy, even down to the last confusing moments of working out how to order and present our research in a performative way in just a few short hours. Of course I had a hunch it would. Sue and I had had a couple of coffees beforehand on recommendation of the amazing Karen Christopher who thought we might have shared interests when I'd explained I would be making work based around the hedgerow. We'd also of course had a couple of email exchanges beforehand.

The first thing Sue did, before we even began meeting was share her brilliant video about Hedge Laying. So that seems as good a place to start as any. Click on the link below to see it and here's some info about it first:

John Calder - Hedgelayer, Charcoal maker and land artist, in conversation with artist Sue Palmer, about working with hands and feet in relation to the West Dorset landscape - the 'and' of the hand. The conversation took place as part of the project 26 and 7 Bones, made in collaboration with Sally Watkins in 2012. The video has been edited to focus on the specifics of the art of hedgelaying.

Sue's Art / Nature blog can also be found HERE. This link actually takes you straight to an interesting post by Sue about the relationship between hedge trimming and society's current obsession with hair waxing (yes, you did read that right).

Anyway, back to the Ramble... For our first day we went to Hampton Court Palace to visit their famous maze. Our reasoning being that it seemed like a good idea to go somewhere specifically to get lost. Here I discovered that Sue talks to everyone and through doing so manages to find out facts that aren't on the walls or in official books. Most of our snatches of conversation with staff, passers-by, volunteers etc began a conversation between ourselves and definitely had an impact on our 'Performutation' (our invented word that describes the form of our final 'show and tell' performance).

It seemed on our second day together that visiting the Museum of London (Docklands) was most appropriate. I had mentioned some information I had read about The Great Hedge of India and Sue had by that time read the book that coined the name by Roy Moxham (a recommended read by the way). We wanted to find out something about The East India Company and liked the museum's proximity to Canary Wharf and wanted to see some of its corporate box hedging and see if we could spot any hedge-fund managers (!).

We actually didn't find too much on the East India Company as it turns out, but had some more great conversations and it felt really clear where we should go next, a decision underlined when we were confronted with the Jubilee Line map as we were leaving.... Stanmore, where Elizabeth Brightwen's grave was and the remains of The Grove (the home she made famous through her books).

I'm not going to talk much more about what we found there as I want you to come and see our performance at some point in the future! However, it might be interesting to know how we spent our days:

Our sharing felt unknown. We had no idea if what we'd created would work or be of interest to others, but luckily it seems it was! We were described as 'detectives presenting our findings' in audience feedback and it genuinely seemed affecting to those watching.

There is of course lots of work still to do though and we now just need to work out how to secure some more funds to finish the piece (that old chestnut). There are a couple of extra areas of research we'd also like to do and are off to see Roy Moxham's collection of bird eggs next week (Roy is the author of The Great Hedge of India whom has kindly invited us round)....

Ramble 2  - Rings Loops and Doublebacks was shown at Undercurrent  April 11-13 including two great performances by the St Mary de Haura Handbell ringers. They performed a carefully selected set of five songs on both the 12th and 13th at midday which was as follows:

The Ashgrove, The Oak and the Ash, Green Bushes, Oranges and Lemons, St Peter and St Paul

The sound was really exquisite.  Ethereal at moments... And moving... I don't think this will be the last time I work with handbell ringers! I will post some photos of them in action soon.
So how had the installation changed from the work in progress version of the piece?  Well...

- Scott and I reworked the sound loops.
- The tree got bigger.
- Some special holders for the speakers were made (so the golden horn literally slotted into them).
- The room which they were presented in was carefully 'dressed'.
- The Memento packet changed a little.
- The large bit of text I wrote (almost and artistic rationale for the piece) was presented on a kind of stand.
- More gloves had embroidered flowers sewn onto them (thanks mum!)

And, well... I think that's the headline changes.  There were more of course...

Hopefully the piece will get out and about again at some point. Ramble 1 has two new dates coming up so I'm sure it will.

For now here's a few images of the piece: 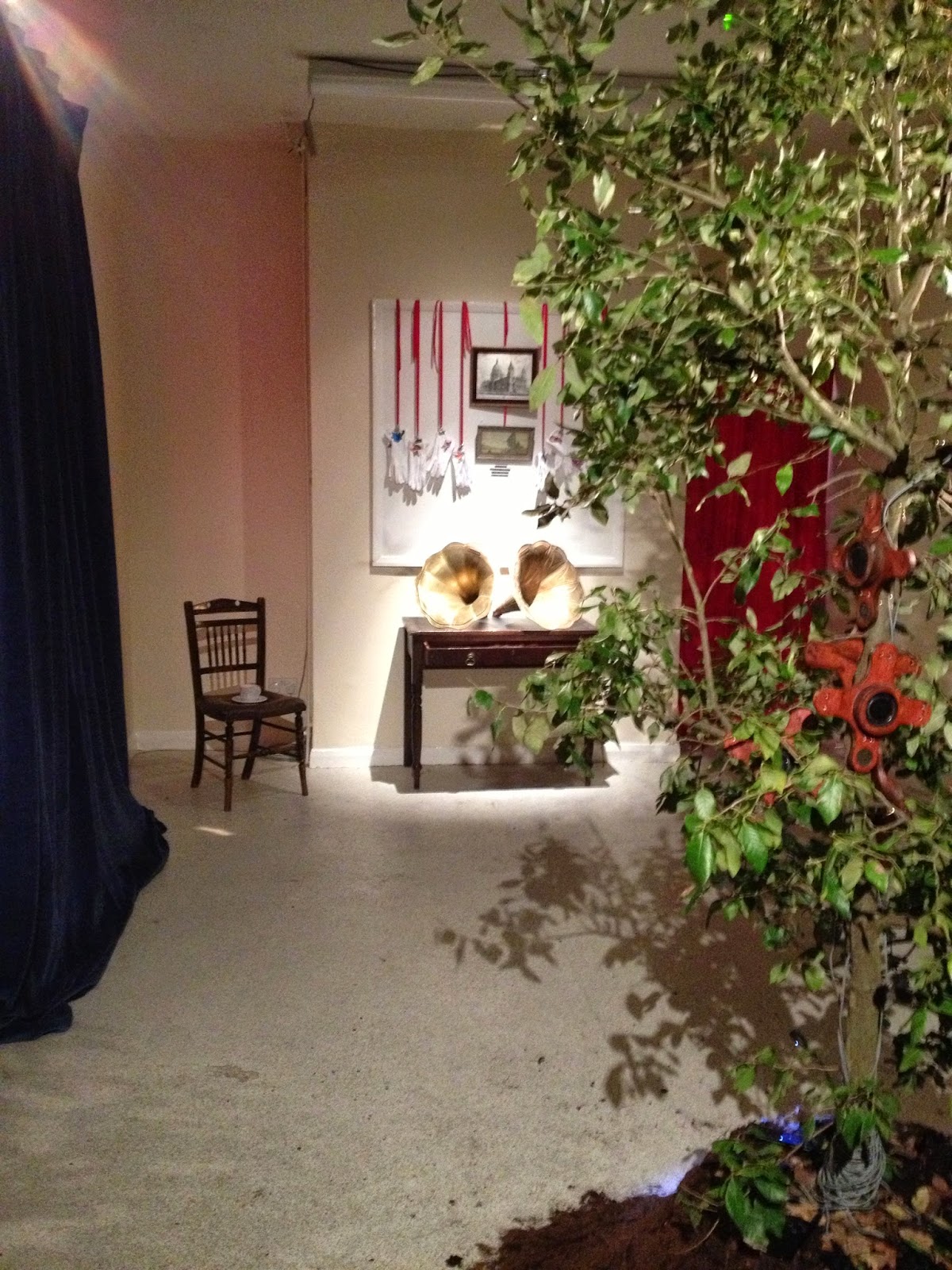 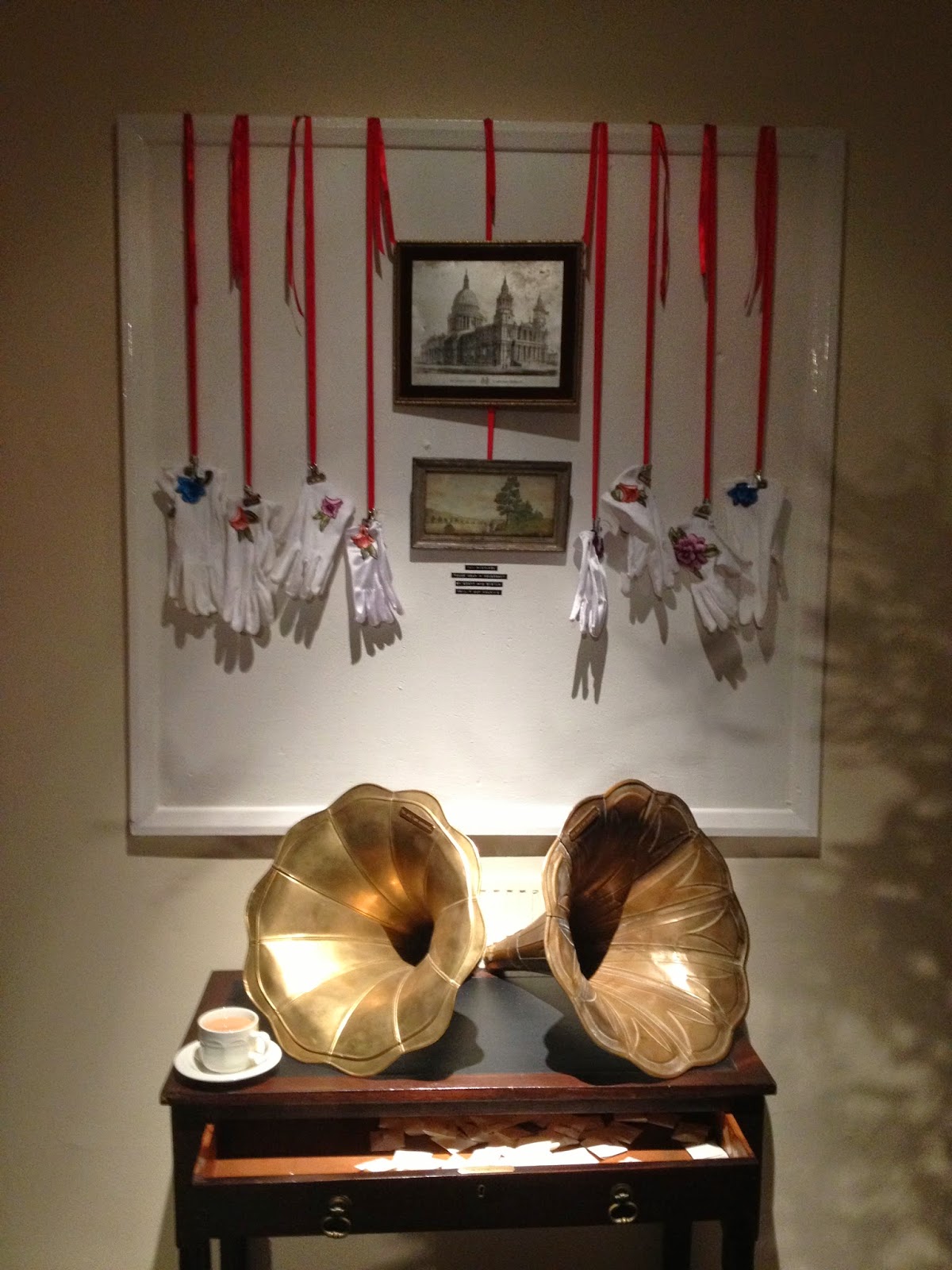 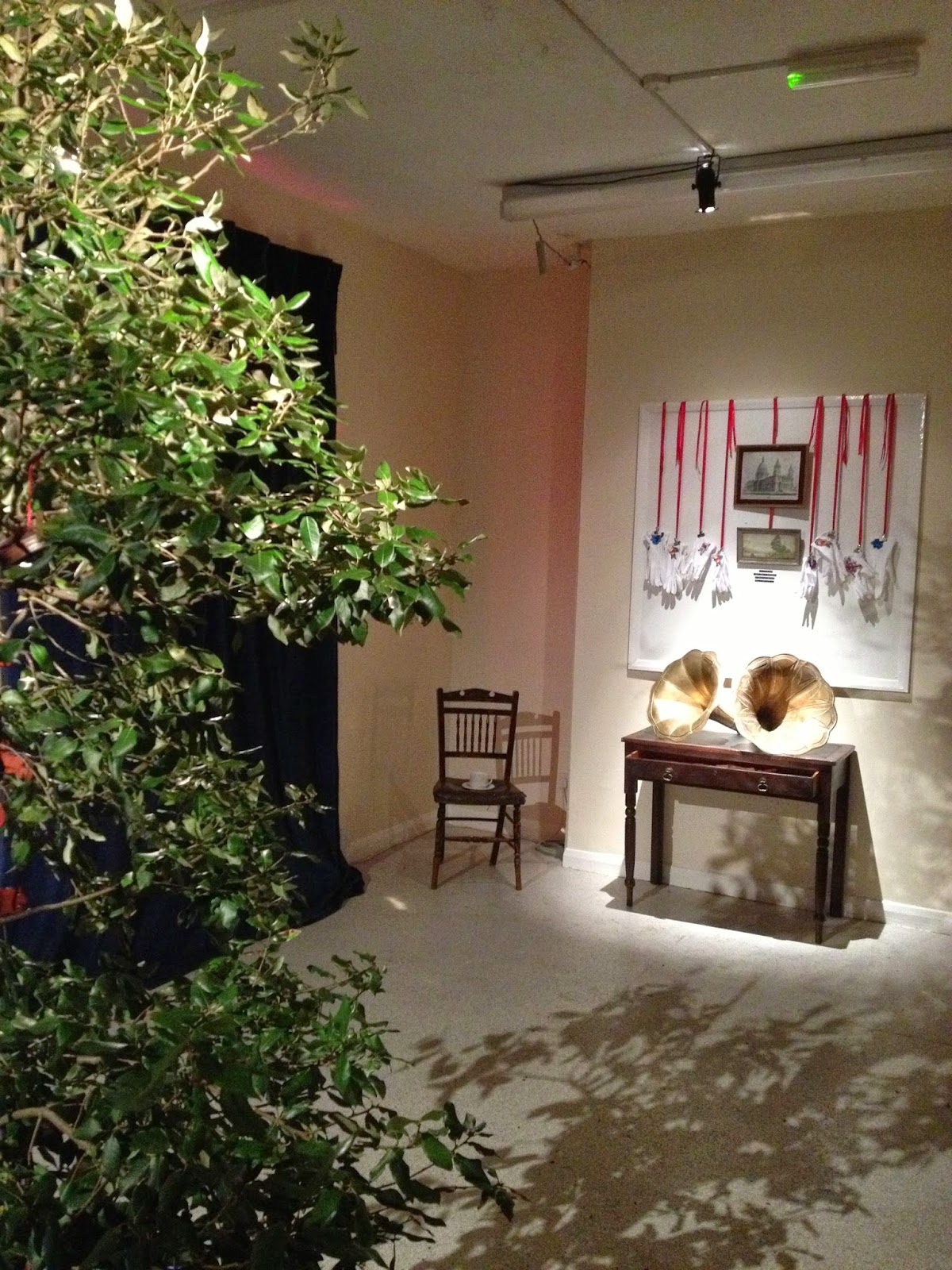